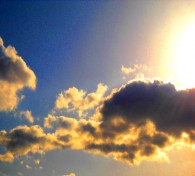 It was going to be one of those days. Jackson knew it as soon as the bullet entered his skull. It was a strange sensation for Jackson, watching his lifeless body falling to the floor, and he was slightly upset that it was a once-in-a-lifetime experience.

Being dead, he decided, was definitely not all it was cracked up to be. The real world had faded away, and now Jackson was standing in a white void. As far as he could tell, he was completely alone. On the plus side, there was a pile of paperwork on his desk that he didn’t have to do anymore.

Jackson spun round to see who had spoken. “You weren’t here a moment ago,” he said accusingly to the old man standing a few feet away.

“Very observant of you.” The old man sighed sarcastically and produced a clipboard from behind his back. “Name?”

“Who wants to know?”

The old man sighed again and flopped backwards. As he did, an armchair appeared behind him and he landed comfortably in it. “I am Peter, Guardian of the Gates of Heaven,” the old man intoned. Jackson could almost hear the capital letters falling into place. “Name?” the angel demanded for the third time.

“Jackson Martin Jackson.” The angel let out a little snigger when he heard this, and then wrote something on the clipboard. “Shouldn’t you already know?” Jackson asked. “That is, if you really are Saint Peter.”

“It’s God who’s omniscient,” Peter exclaimed. “Do I look like God to you?”

“You’re very chipper for someone who has just been murdered,” Peter observed.

Jackson shrugged. “Being out of my body just seems to make the whole thing irrelevant.”

“Hmm.” Saint Peter tapped the clipboard with his pen. “Can we get on with business?” he asked pointedly.

“Indeed. Now, there are three choices open to you, Mr Jackson,” the angel said. “Number one.” He ticked it off the list as he said it. “You can go from here to whatever Heaven you happen to believe in…”

“Hang on,” Jackson interrupted. “I thought Heaven was a place. You’re talking as if it’s a state of mind.”

“You haven’t been reading that bloody awful book have you?” Peter asked. “I tell you, whoever decided to write it down needs to be given a kick up the arse.” He looked at Jackson. “Heaven is a real place and a state of mind. Everyone goes to whatever their idea of Heaven happens to be, but all Heavens are one and the same. Number Two.” He ticked it off the list again before Jackson could question his description of Heaven. “You can return to earth as you are now and do whatever it is ghosts like to do; maybe there’s someone out there you’d like to haunt or whatever.”

“Number Three,” Peter said impatiently. “You can return to your body, still dead mind you, and get revenge on your murderer, or you can just be a mindless, unstoppable, zombie killing machine. The choice is entirely yours.”

“Before you decide, I must warn you, all three options have their downside.”

Jackson waited, but there was no more information forthcoming. “Well?” he asked.

“You can’t just tell me there’s a bad side to whatever choice I make and leave it that,” Jackson cried.

“Well, it would be nice to make an informed decision.”

“Not my problem I’m afraid.” Peter shrugged. “I’ll tell you what,” he said standing up, the chair behind him disappearing as he did. “I’ll give you some time to mull it over.” Before Jackson could reply, the old man had vanished.

“Thank God he’s gone,” a new voice behind Jackson exclaimed, causing Jackson to spin round for the second time. “Sorry, not God. I’ve got nothing to thank Him for…” the speaker hesitated. “Oh well, thank me he’s gone.”

“And you are?” Jackson inquired of the newcomer.

“Surely I need no introduction?” the newcomer asked.

“The Deceiver? The Lord of the Flies? The Father of Lies? The Tempter?”

“They all sound like bad heavy metal bands,” said Jackson.

“They’re all very unfair, I know that. The Beast?”

“So what, now you’re going to tempt me to a life of eternal damnation?”

“Peter was right. You have been reading that damn book, although that doesn’t explain why you didn’t know who I was.”

“You don’t look like I imagined,” Jackson said, looking at Satan with his head tilted.

“What, you thought I would be all red with a forked tail and cloven hooves?” Satan asked, smoothing down the lapels of his expensive suit.

“Bad press,” The Devil announced. “God, bless him, always had the best PR.”

“So why are you here?” Jackson asked.

“To tell you not to trust that little son of a bitch,” Satan said. He put his arm around Jackson’s shoulder and leaned in. “He’s a little shit,” he whispered conspiratorially. “He knows exactly what the downsides of your choices are, but he gets great delight in not telling you. And Heaven is a real place. He just likes to let everyone think they’re all going to different places.”

“Alas, I wish I could,” Satan said backing away, “but it’s against the rules you see.”

“You’re the Devil,” Jackson pointed out. “Aren’t you supposed to break the rules?”

“There’s that bad PR again. Do you know what I did that got me thrown out of Heaven?”

“Wasn’t it a war against God?”

“A war?” Satan laughed so hard he began to cry. “Do you have any idea how stupid that sounds? How could I, an angel, possibly hope to win a war against God, a Being that is all-knowing and all-powerful? Before I’d even hatched a plan he would have known about it.”

“So what did you do?” Jackson asked.

“That’s just it, I don’t know,” Satan said dejectedly. “God just said he had seen my plans and kicked me out. Whatever plan it was I never got to find out; he’d figured it out before I’d even formulated anything. Actually before I’d even decided I was going to plan anything.”

“Thank you.” Satan brightened up.

“Look, did you come here for a reason, or was it just to put your side of the story across?”

“There is a fourth option,” the Devil admitted. “Peter wouldn’t tell you about it because that lot don’t like it when I get involved.”

“Let me guess. You want me to accompany you to Hell, where you will offer me some sort of deal that ends with you in possession of my soul.”

“Honestly, where do you people get your ideas?” Satan shook his head sadly. “Actually, you could come to Hell with me but, instead of me owning your soul, you can have all kinds of fun.”

“Well, you know of course Hell is full of the most evil humans in history?” Jackson nodded. “Which of course means they are the most fun. Honestly, in Heaven it’s all lying around and everyone being terribly nice to each other… boring. In Hell, you can gas Hitler, or break Al Capone’s head open with a baseball bat, basically all those things you would love to do to the people who deserve it, but when you were alive you were too nice to contemplate.”

“Look out, Peter’s coming back,” Satan interrupted. “Press him for more information,” he said and disappeared.

“Mr Jackson,” Peter said, materialising out of the void. “Can I press you for a decision?”

“I’d like a bit more info,” Jackson demanded. “I have a right to know the downsides of my choices.”

“It’s not really my place to say—”

“Would you make a choice like that without having all the facts?”

“I’m not sure I should.” Peter squirmed. “It’s more than my existence is worth.”

“Well, I’m not making any decisions until I get all the info.” Jackson folded his arms emphatically. “And I bet you’re not allowed to just leave me here, are you?”

“Please,” Saint Peter begged. “You’re not the only person to have died today. There’s thousands of you to get through—”

“So give me what I want and you can go and deal with the rest of them.”

“Fine,” Peter huffed. “If you choose to go to Heaven, you have to spend the rest of eternity without having any negative thoughts. Failure results in total removal from the space-time continuum. If you decide to be a ghost, you will spend the rest of time stuck in one place; you will not be able to move from the confines of the area allocated to you. And if you choose to become a zombie and get revenge, you will be stuck in a rapidly decaying body, which you will more than likely have to keep hidden from the rest of the human race. I don’t think I need to point out what could happen if they spot you. Now can I possibly have a decision from you?”

Jackson grinned. “None of the above.”

“I don’t want any of them,” Jackson explained.

“But you have to choose something,” Saint Peter said, flustered.

“I knew that git couldn’t keep his nose out!” Peter exploded. “I was really hoping you would choose something before he saw you. Do you know how many souls have got into Heaven since he was expelled? None. Not one single person ever picks that one. He always gets them to go with him.”

“Excellent choice, my friend.” Satan reappeared, a huge grin spread across his face. “Sorry, Peter, but this one’s mine.” He put his arms over Jackson’s shoulder and they both disappeared.

WHY WE CHOSE TO PUBLISH THE AFTERLIFE OF JACKSON:

This is Andrew Atkinson’s second appearance in our magazine. His first, “Getting a Life” made a chilling impression on us and our readers. “The Afterlife of Jackson” shifts gears and presents an amusing take on Heaven and Hell that we found quite unexpected and pleasantly surprising.