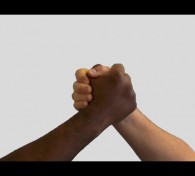 Just a quick note to let you know I’m coming home to visit.

A lovely nurse here at the hospital is writing this for me.

They are discharging me next week. Life sure changes when you lose your sight, but don’t worry or make a fuss please. I’ve accepted it and I’m prepared to carry on.

They set me up with George, a fine teacher. He taught me how to deal with the simple things that I always took for granted when I could see. He is a great guide and has become a close friend. Get this, he’s been without sight since he was born. A true case of ‘the blind leading the blind’. Hope you don’t mind but I’ve invited him to come along. I told him about the fried catfish and don’t know if I could stop him now even if I wanted to.

“What are you sayin’, Ma? Why does he have to wait on the back porch? George is my best friend.”

“Lucille’s colored, Ma. She’s been in here since I can remember. Christ, she raised us.”

“Don’t you cuss the good name of the Lord around me. Where’s your manners, son? We brought you up a good Christian. Watch your mouth. Why did you bring a colored boy here? I think you’ve lost your brain along with your eyes, ‘sides Lucille was the help. She ain’t no guest or visitor, and she’s not here anymore; fired her for back talking. What will the neighbors think if we bring that boy in here for dinner? I won’t be showin’ my face in church after that now, will I? Are you crazy? I ask you again, Billy, why did you bring that black boy here anyway?

“Well, Ma, he’s the nicest person I know, and I was hopin’ you might see that too. After I got back from the war, I wanted to die. George held me like a baby, and that’s how I cried, just like a baby. He told me there was a special reason this happen’ to me. That there was some sorta plan I had no control over. I believe him. He taught me how to see without my eyes. He’s been with me through it all, and I’ll tell ya somethin’ else, I’ve never known what color he is, and I don’t care. I’ve changed. For the first time in my life I can really see things, important things. If George ain’t welcome here, then I don’t wanna be here either. I’m leavin’, Ma. I’m walkin’ out that door and never comin’ back.

“Where, Billy? Where are we going?”

“For the best damn fried catfish in the county.”

The inspiration for this little story came from my father. He was blind but you could never convince him of that. During the race riots in the 60s and early 70s he once told me that he had the cure for racial prejudice. He said, “I’d just make everyone blind.” Extreme but effective. I believe it just could work. He went on to say that then we’d all be bumping into each other. Which isn’t always a bad thing. He made a lot of friends that way.

Michael Osias writes stories because the voice inside his head insists. His first published story Bumper Sliders (an Albert story) can be found on Youth Imagination Magazine.

WHY WE CHOSE TO PUBLISH The Best Damn Fried Catfish in the County:

In his flash fiction piece, author Michael Osias has succinctly captured a moment in time when something that used to be black and white no longer is.