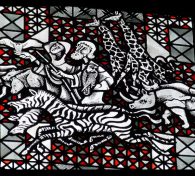 The decision needed to be made now. There was no more time to waste. The man didn’t know who had miscalculated the amount of food to store, him or the boss, but it really didn’t matter at this point.

His animals were eating each other to survive.

Already, he had lost the majestic flopar birds; the oh-so-cute millinows; and the furry, slow-moving pedrals. He couldn’t leave these life-and-death decisions up to the creatures anymore.

He sat at what he called his desk and looked at the sheet of papyrus before him. If his calculations were right, this ordeal would be over in two days. After that, all the animals would have plenty to eat, but, until then…

He examined the list he had made of all his animal species. One of them would have to die to provide nourishment for the others, but which one? Some of them wouldn’t yield much meat, others would serve a useful purpose once this trial was over, and still others he just really liked and couldn’t bear to sentence to an ignominious death.

He contemplated the very last entry on his list. Yes, they would provide a good amount of meat. He had heard from friends that their flesh was tender, flavorful, and—most important—filling. The boss hadn’t chimed in at all on the problem, so the choice was up to the man.

Yes, he thought, that was the proper decision. He would miss the soon-to-be-food animals, but their species would be honored throughout time as the ones who had made this trip possible. The man stood up from his desk and called to his son—who arrived promptly.

“The unicorns,” Noah said, “slaughter them, and feed their meat to the others.”

His prose work has appeared in several magazines and anthologies. In 2015, his script “The Candy Man” was produced as a short film under the title Dark Chocolate. In 2013, he won the inaugural Marion Thauer Brown Audio Drama Scriptwriting Competition.

WHY WE CHOSE TO PUBLISH “The Choice”:

Although another tale of what happened to the unicorns, we felt that Mike Murphy’s “The Choice” gave us a different spin on the theme and did it very well in under 400 words. He also tells us not just the unicorns were lost.

BEEN THERE, DONE THAT by Steve DuBois

“OF WHAT ELSE HAVE YOUNG LADIES TO THINK, BUT HUSBANDS” by Lois Greene Stone

CLARION OF THE DEAD by Sophie Jupillat Posey

THE CHOICE by Mike Murphy

THE EMISSARIES by Shannon Carpenter