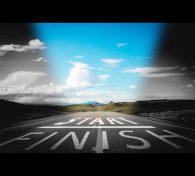 They run, not because they need to, or want to. They run because it’s what they have done every day for as long as they can remember.

In school, they ran to get girls. Around and around the track, perfect bodies gleaming in the sun.

In basic training, they ran to get fit. Mile after mile, up and down hills, strapped to a backpack with a full loadout.

During the war, they ran to stay alive. Can’t outrun lead, but you might as well try.

After the war, in the CIA, they ran to stay sharp. Not every day was spent in the trenches, but you never knew when the shit would hit the fan.

They left the field, pushed pencils, and ran to keep from dying young.

Now, they’re old men, and they run because it’s what they do. Almost out of steam, they shuffle through the woods, along a trail that no one uses. No one to remind them of what running is supposed to look like.

The finish line is the same as the starting line. The parking lot. Two cars. They meet there. They tell no one where they go because neither of them has anyone to tell. One never married; the other has been a widower longer than he ever was a husband. He traded in his only son for a folded flag and twenty-one shocks to the system.

They rarely talk. There isn’t much to say. Their days are all the same. Same places, same people. It should have been a reward, they say on the rare occasions they converse. So why does it feel like running out the clock?

Today, on the way back, one of them stops to catch his breath. The other joshes him, secretly grateful for the opportunity to catch his own. But then he sees his friend grab his left arm, curse, stagger.

The other pulls out his phone and promptly has it slapped from his hand. Hunched over, his friend looks up at him. With that look, more is said between them than in the last five years of friendship.

It’s a reminder of the deal that is in place.

It’s an expression of love. Of gratitude. Of respect.

He manages to lift his friend onto his back and carry him to the finish. Not for a moment does he consider the impossibility of it. No man left behind.

He reaches the parking lot as the sun sets. It’s then and there that he finally calls the emergency services. They come and take his friend away.

He sits in his car for a while. There are tears, but not many.

The sun disappears and the cold creeps in. He wipes his face and retrieves his service weapon from the glove compartment. It’s almost as old as he is, but he’s kept it in good shape. Cleaned and oiled regularly.

It does its job well.

Chris Kok is an enigma, wrapped in a contradiction, stuffed inside an éclair. He teaches songwriting but prefers to write fiction, himself. He is Dutch but writes almost exclusively in English. Chris lives in Amsterdam, The Netherlands with his wife, their newly acquired puppy, and two suddenly grumpy cats.

WHY WE CHOSE TO PUBLISH “The Finish Line”:

Author Chris Kok has crafted a powerfully resonant flash fiction piece that demonstrates the power of properly using an external omniscient narrator and unnamed characters. Note that there’s no dialogue here either. It’s also an excellent example of how you can SHOW through telling. It accomplishes so much in only 510 words.

This piece reminded us of an equally powerful piece, “My Old Silver Bullet,” that we published in our very first issue of Fabula Argentea, which you can check out. That one, in contrast to Chris Kok’s piece here, is written in first person and is rich in dialogue. It makes for an interesting comparison of techniques to show us that there is no single best technique or perspective to use to tell stories.