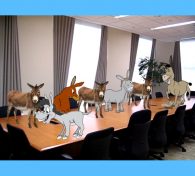 Lieutenant Duke LeJeune tapped his pencil in frustration on the large birch table. This interrogation wasn’t going well. The answers from his target were either absurdly detailed or absurdly vague: by design, he suspected.

He and his partner, a cybercrime specialist, were in the spacious boardroom of Gilgamesh, a global software company, investigating the release of the company’s source code onto the Web. These days, so much of San Francisco’s economic health depended on the software and biotech industries that solving a cybercrime was always a priority for the SFPD.

For Gilgamesh, finding the culprits wouldn’t matter much. Now that its crown jewels were leaked and in the wild, along with thousands of internal emails, the company was dealing with the aftershocks, watching its future spiraling down the drain into bankruptcy and oblivion. But it mattered to the SFPD, and so it mattered to him. Besides, ever since he joined the Force, it had been his sole ambition to bring the guilty to justice, no matter what the crime. He had been successful about 97% of the time. He wanted this one in the win column too.

Duke glanced down at his open notepad covered with smudged scrawls, thinking wryly that he was a dinosaur in this digital world. He looked out large, undraped windows at somber skies swollen with thick raindrops ready to be shed. He sighed and straightened his back—time to sharpen his queries.

“We’re pretty sure the code was put out on your website between 7:00 and 7:15 AM, Pacific Time. Your CTO looked at something called the build number and said it was the latest version. Where were you?”

“Where I always am… in the cube next to the server room—but in a sense I was everywhere, monitoring all our systems everywhere.”

“And you didn’t observe anything odd, on your floor or in the systems?”

“All users logged in had valid sign-ons for the systems they accessed.”

“And who, if anyone, downloaded software?”

As soon as he asked the question, Duke recognized his mistake. His target began reciting a laundry list of names and times. Duke had to struggle to interrupt and to make the interruption stick.

“You can just generate a report, can’t you, and e-mail it to me?”

“What I want to know is if any downloads were a sign of potentially criminal activity.”

“Without knowing motives, I cannot answer.”

“So we have something in common. I need a motive, too, which seems to be killing the company.”

The target did not respond, perhaps waiting for a real question.

Duke thought for a moment. It was time to be direct.

“Do you know who put the software out onto the Web?”

Duke leaned back and just stared, stunned. He had not had any inkling, and the action just did not fit the target’s profile. His partner also just sat, riveted.

“Now just why did you do that?”

“It was a response to a question from Atul Aggrawal.”

“And what was his question?”

“The donkeys who work for me can’t sell worth a damn. Why don’t you just give it all away free?”

Duke understood and rose. There was no cybercrime here, at least no indictable cybercrime.

He faced the target, who was attending via a monitor. “Thank-you for your time, ALICE.”

As he and his partner left, he wondered if Aggrawal could sue the coders, who had not accounted for rhetorical questions when they built Gilgamesh’s master AI.

Alyce Rita Campbell was born in Edmonton, Alberta, Canada. After graduating with a BSc in Geology and an MBA, she went to Vancouver and earned a PhD in Finance. Over the years, Alyce has worked in a variety of businesses, all finance or technology related. In the works are more tales from the financial technologies world, present and future. Her first novel, Fatal Code: The Gilgamesh Killings is available on Amazon.

WHY WE CHOSE TO PUBLISH “The Importance of Being Exact”

Do we really have to give a reason for publishing this piece? We think this delightful, well-written satire speaks for itself.

One comment on “THE IMPORTANCE OF BEING EXACT by Alyce Campbell”