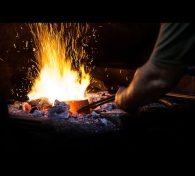 The elders chose Maliki for the job because his late father had been the blacksmith. Their decision was foolish. He shared none of that man’s gods-given talent. As a child, he would watch him work. Not often, though, because the fire was dangerous, and his father was easily annoyed. His mother would come and take her little one into their small house, which pleased the old man no end.

The truth was that someone had to take care of this, and Maliki was among the very few who had not fled the village in fear for their lives.

Roga was the first to go missing. Then Elarn, and then K’ler. It took the doctor a while to identify the shredded remains of Topef, but then he knew what they were dealing with.

A bead of sweat rolled off Maliki’s chin and burned away in the sizzling fire.

He took the gun from a cabinet. There was a solitary bullet. He needed to make more, which he had never done nor watched his father do. He picked up the projectile, feeling it all over and holding it close to his aging eyes. For the first time in years, he wished for his old man’s guidance.

Using some vintage tools he had bound together for a mold, he scooped many “bullets” from the liquified metal. After they had cooled—an eternity!—he opened the pistol’s magazine and tried them out for size. Too big, too small, too rough. Three of them fit well enough to make him believe they would fire when needed, which would be soon.

Now, the silver. The villagers had brought him everything they owned before fleeing: tea sets, buckles, jewelry, religious artifacts. He dunked each bullet into the bubbling liquid, hoping its addition wouldn’t make them too big for the gun’s chambers. He suddenly wondered if the projectiles needed to be made entirely of silver. He hoped not. He didn’t have the time.

The moon was rising. The thing hadn’t skipped a night in nearly a week. It would show its furry face soon.

After mouthing a silent prayer, he slipped the silver-coated bullets into the gun. They all fit! Hopefully, they would kill the thing.

If not, he’d save one for himself.

Mike has had over 150 audio plays produced in the U.S. and overseas.

His prose work has appeared in many magazines and anthologies.

Mike is the writer of two short films, Dark Chocolate and Hotline.

In 2013, he won the inaugural Marion Thauer Brown Audio Drama Scriptwriting Competition. In 2020, he came in second. For several of the in-between years, he served as a judge.

WHY WE CHOSE TO PUBLISH “The Last Bullet”:

Here, author Mike Murphy delivers a tight flash fiction piece that pulls the reader in from its opening line and wastes no time building suspense. Even though most reader will likely have guessed the nature of the threat halfway through (with the mention of silver bullets), the author waits until the very last line to reveal the significance of the title. And we say “bravo!” for pulling that off so elegantly.