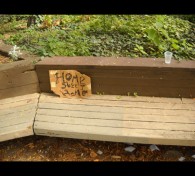 The library I’d gone to every week as a child had been torn down and replaced with a new building. The city had wanted green and modern, and instead, the library ended up more sterile than a hospital. Even the straggly bushes on the north end that were supposed to be a garden didn’t help.

Still, I pushed open the door to see what else the city had done. Two things hit me immediately. The first was the iciness of the air conditioning, hardly a green initiative. The second was the smell.

The reference librarian glanced up wearily at my approach. The name plate at the edge of the desk identified her as Rosario, and the gray streaking from the center part of her black hair made her look ten years older than she probably was.

“Yes, we know,” she said with the weariness of someone who had been asked the question a hundred times.

Ever since Proposition 22 had been passed, the undead were turning up in the most unlikely places. It was the main reason I’d returned to L.A. after almost fifteen years. I’d taken up studying the law as it pertained to the undead. Many cases involving zombies ended up in court, and there were still a lot of legal questions being worked out. One getting a lot of attention, as it worked its way up to the California Supreme Court, struggled to answer the question of if a zombie was raised, was putting it back in the grave murder?

Of course, California would be first.

I doubted if any of the politicians had actually considered what would happen beyond scoring political points for votes.

Rosario nodded. “He’s homeless. He comes in here every day and reads. He doesn’t disturb anyone, so the police won’t run him off. The parents won’t let their children come here. We have hardly anyone any more. The city is thinking of shutting down the library.”

Bureaucratic logic. I resisted the urge to roll my eyes. I still remembered coming in the old building every Thursday after school and scanning the yellow spines of the Nancy Drews for one I hadn’t read. I couldn’t let a politician’s stupidity sacrifice another little girl’s access to books.

“Can I try something? I may be able to help.” I’d gotten used to working with zombies and could get past the initial reactions that were normal. “My name is Sindy.”

Rosario shrugged as if she didn’t expect me to have any luck. “If you want. I’ll show you where he is.”

Maybe it was me, but the interior of the library seemed smaller, though the building was bigger. The ceiling was high enough for two stories—more books—but the architect had designed an artsy thing for the ceiling instead. Silver beams crisscrossed in random patterns across the ceiling, all shiny and modern looking. I supposed it looked okay, but it just made me wish they’d spent the money on the books.

There was just one large room sharing all the bookshelves, tables, and computers. The zombie sat at the furthest table, a book in front of him. He used the tip of a pencil to carefully turn the pages. In life, he’d been a handsome man—swarthy skin, proud lips, and expressive black eyes. Death had robbed that from him, quite cruelly. His skin had turned flaccid, the lips were half-rotted away with decay, and the eyes were empty and sad. He kept an olive-drab coat salvaged from a homeless shelter buttoned up to hide the worst of the damage to his body from the accident, though he couldn’t do anything about the smell.

I sat down next to him, which surprised both Rosario and the zombie. “What’s your name?”

“Jose Canelos.” He knew why I was here. “I don’t have any place to go. My wife and family don’t want me.”

“Why did they raise you then?” It was expensive to raise a zombie, and even more expensive to put one back to rest.

Bitterness tinged Jose’s dead voice. I was amazed at how much death took the essence of the person from the voice. “My wife wasn’t happy with the will and wanted me to change it. She thought that since I was a doctor, I must have more money hidden away somewhere else, and she wanted it. I told her I didn’t have anything, and she put me out on the street and just left me.”

Yup. The politicians had definitely not thought there would be zombie homeless when they passed their laws.

Still, I felt sorry for him. He had not chosen this, but he was stuck with it. I glanced back at Rosario. “I have an idea that might benefit both of you. Go around to the side of the library.”

“There’s a garden out there,” Rosario said, her voice tight.

I ignored her. She wanted him gone, but there wasn’t going to be an easy way to resolve this. If I tried to send him anywhere else, he would likely be back here in a few days after those people ran him off. “With benches and shrubs. Rosario will bring you a stack of free books to read. You have a place to be, and the children can come back to the library.”

“Thank you.” Jose’s face brightened, at least much as a zombie’s could. He laboriously stood up and shuffled after me.

As I let him out the side entrance, I made mental note to talk to an attorney about my will. I needed to add a statement: Do not bring back from the dead as a zombie.

Linda Adams is a graduate of an online Odyssey workshop, and her short stories have been published in the anthologies, “The Darkness Within” and “The Princess, the Boatman, and the Lizard.” She is currently working on a contemporary fantasy/action-adventure novel.

WHY WE CHOSE TO PUBLISH THE LIBRARY PATRON:

Until this story came to our attention, we pretty much felt that “If you’ve read one zombie story, you’ve read them all.” Author Linda Adams proved us very wrong. We found this piece irresistible. It represents the out-of-the-box thinking that we look for in the stories we choose for publication. Further, it has a message that goes beyond the story itself.