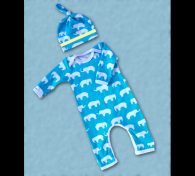 Strands of light blue twisted, crossed over, then sank into the expanse of knitted wool only to emerge at the next stitch and repeat the pattern again. They ran in parallel symmetry, converging up to the pompom at the top of the cap. Around the circumference of the brim ran a border of yellow on which marched small embossed elephants, each holding the tail of the one before it with its trunk. Fine wisps of dark hair the same colour as Nick’s curled out from beneath the edge to cling to its fuzzy surface in places. When we’d bought it eight weeks ago I’d thought it was too small to fit anyone, but Nick had correctly guessed it would be the right size.

The skin of Bobby’s forehead not covered by the cap was furrowed as if caused by a frown. This accentuated his eyebrows, delicate lines of barely there hair on the ledge of his sockets, inclining medially upwards to form an arc at the top of the bridge of his nose. His nose was short, more like a nubbin, tilted slightly upwards at the end like mine; its tip was a little raw, as if wiped by a tissue one too many times.

I ran my finger over the smooth and doughy surface of his swollen lips. Velvety glossed skin a few centigrade cooler than mine. Drooping in loose repose, colour not right, a dusky shade of purple.

He lay in my arms, loosely wrapped in a green flannel blanket, the back of his head resting in the crook of my left elbow. His body was both light and also strangely heavy. I held my arms still, though there was no reason why. Looking at him I tried to align our eyes. His lids were parted slightly, a hint of blue between moist lashes. As I sat there, propped with three plastic-covered wipe-down pillows between my back and the bed’s head, I kept wanting, almost waiting, for those eyes to blink.

Nick sat on the edge of the bed, arm on my shoulder, looking at our Bobby. Afternoon light angled in through the window and cast Venetian-striped contrasting shadows on our son’s already mottled cheeks. My finger moved downward, tracing his chin, then onwards across his jaw to his left ear, curving to avoid an open patch of sloughed skin. It wasn’t the only one. There were two on his right cheek and a large one on the side of his neck, the full extent of its angry margins concealed by the collar of his Peter Rabbit jumpsuit. Made of the softest white cotton, it was the outfit I’d planned for our baby to wear on his first trip back to our home. Across the garment, multiple little rabbits sat on their haunches, cheeks puffed with chewing, holding a large carrot whose tip was missing. Sewn into the outside seam of the left shoulder was a tiny blue tag saying this was a genuine item. Matching mitts and booties were still in the bag.

I moved aside a fold of blanket so I could see more of him. His left arm was angled, bent at the elbow, resting on the front of his chest. The embroidered cuff of the suit’s sleeve was hitched a short way up the forearm. Between the rim of the cuff and the base of Bobby’s closed fist circled a thick, clear-plastic band fastly secured. In the pocket of the band a slip of paper had words typed on it in small letters, the portion visible to me saying, ‘Baby of Alicia Rus…’ The bend over his wrist’s bony prominence obscured the rest. A vein line of discolouring more pronounced than that of the skin went up the back of his hand to the fourth knuckle dimple. Lifting his hand gently, I straightened his four fingers and thumb from their loose clench. The webbing between them was puffy and wrinkled, like he’d been soaking in a tub for too long. Such small and frail digits despite their also waterlodden state, the creases over their joints swollen to mere faint lines. On his distal pads were enlarged whorls of print. Opaque slivers of flesh were peeling back from around the nails. I closed his fingers again, covering his hand with mine.

We remained in silence.

Me, my husband, and our baby.

I was conscious of sounds from outside the room—muffled voices, the ping of a call bell and the diminishing roll of a trolley. But these didn’t enter my reverie. The only noise that was real to me was the whistle of breath from my nostrils and the clicking of the clock’s second hand. A mere moment in time, yet this seemed like forever.

‘Would you like an autopsy to be performed?’ Dr Taylor had asked us.

‘It’s your choice. But it may help to find out exactly what went wrong.’

‘We’ll think about it,’ Nick said.

Dr Taylor stood there by the side of my bed. His gaze kept shifting between Bobby and the green blanket. From the edge of my eye I saw his hands move to cross each other and rest at the front of his belt. Speckles of blood soiled the cuffs of his white shirt. I wanted him to leave but also needed him to stay. It was as if I had the delusion that he was somehow able to reverse this. He remained there for a few more awkward minutes then made his excuses and left the room with a final ‘Sorry’.

It was then that Nick had put his arm around my shoulder, and we stayed that way with Bobby cradled against my swelled breasts that were aching with the need to lactate.

‘You haven’t called my mum yet, have you?’ I asked Nick as I held onto Bobby’s hand.

I shook my head. Once our families knew, it would be real.

I stared across the room at the wall opposite. Glints of slatted sunlight reflected off the glass that protected a framed painting. A lamb standing on a hill’s green slope. Underneath it against the wall was an empty cot on wheels. It was the one in which the midwife had brought Bobby back in to me once she had cleaned, weighed, and dressed him.

I looked back at my son and squeezed his hand gently. His soft nails pressed into the folds of my palm. I turned to look into Nick’s bloodshot eyes.

‘Can you ask the midwives if there are any nail clippers around?’

‘I don’t want him to be buried with long nails,’ I said.

I started to cry.

Suvi Mahonen is a freelance writer based in Surfers Paradise on Australia’s Gold Coast. Her non-fiction has appeared in various newspapers and magazines in both Australia, Canada, and the US including The Weekend Australian, The Sydney Morning Herald and Practical Parenting. Her fiction has been widely published in literary journals and anthologies including in The Best Australian Stories and Griffith Review. A portion of a longer work-in-progress was nominated for a Pushcart Prize. She runs an eco-friendly art shop offering a great range of gifts, clothes, homewares, and stationery online here:

WHY WE CHOSE TO PUBLISH “The Maternity Unit”

We love the way that author Suvi Mahonen unfolds her story. Writers are often told to steer clear to telling and description at the opening of a story, but here is an example of how to break the rules. It works because we’re given description that does more than describe. It engages the senses and slowly wends its way to an unexpected and very emotional ending.