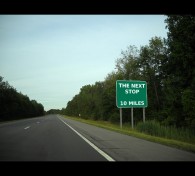 “And the end of all our exploring will be to arrive where we started and know the place for the first time.” — T. S. Eliot

The place looked neither deserted nor open. It was a cable-car-style restaurant with a long row of windows and a small boxy addition attached. No cars, no movement, no hint of life, no reason to stop. The sun was glaring off the glass; the vents on the roof sparkled like silver.

I can’t speak for my companions but I wasn’t hungry, though none of us had eaten for days. I forget who was driving, whose turn it was. It might have been me. We had worked out a system, a timed rotation that was far more complex than it needed to be for five people. Whoever was behind the wheel, he slowed us down and we idled at the lot’s edge, the car parallel with the highway. We studied the building, looking for rain barrels or anything that might hold water.

“It’s just the sun,” someone answered.

“Maybe someone saw us pull in,” said the first man.

“There. See? It flickered again.”

“Or a warning,” somebody answered.

“We should stop,” said the first man.

There was no talking to any of them. Hope does terrible things to people. Apparently they had forgotten that the sun had been playing tricks on us for a thousand miles.

Then someone read the name of the place out loud, stressing the consonants, stretching the syllables, saying it over and over, making what was printed on that sign sound like the lyrics to a song or a mantra that would eventually bring transcendence to us all.

Then we were all saying it the same way, and that was enough to get us squirming in our seats, each taking a turn looking at another while we mouthed the name over and over. No one wanted to be the first out of the car, the first shadow to stretch across that crushed stone lot, pointing toward more disappointment.

From the beginning, a big part of our problem was that we lacked a true leader.

“Let’s all go in together,” I said quietly.

I wasn’t a take-charge guy but I’m ninety-percent sure it was me who said it, though it’s possible we all vocalized the same thought at the same time. Our throats were dry and our lungs were so full of dust that our collective voices would have barely exceeded a whisper. And what’s funny about that, pretty near ironic, is we had all at one time made a decent living with our voices, either in front of a class room, or at a podium, or on a theatrical stage, or, in my case, from inside a glass-enclosed office perched high above an assembly line.

I blame the heat. I’m still fuzzy about what was said, what was implied, how long we sat there staring at what might have been salvation, immediate destruction, or both. I’m probably not the best person to tell this story.

But I can say with absolute certainty that none of us got out.

I think part of what held our attention so long was that the sun had turned the windows into a row of mirrors, and in some of those mirrors our reflections were looking at us like people inside looking out. And those were the people we wanted to be, and would have become if we weren’t such miserable cowards.

Before we drove off, I took a mental snapshot to hang on the wall surrounding my heart. Soon the sun would be gone and the road would no longer waver like the surface of an endless black river. Soon only our headlights would guide us, and the moon’s glow, if there was a moon, would try to help. I wasn’t worried. I had an innate sense of optimism that I couldn’t shake, and I knew that together, sooner or later, we would get somewhere, and we’d know it the moment we arrived.

Bob Thurber is the author of Paperboy: A Dysfunctional Novel(2011) and Nothing But Trouble (2014) a collection of brief stories accompanied by stunning photographic images released from Shanti Arts Publishing. Over the years his work has received a long list of awards and citations, appeared in Esquire and other notable publications, been utilized as teaching tools in schools and universities, and selected for 40 anthologies. He resides in Massachusetts. For more info, visit: BobThurber.net

WHY WE CHOSE TO PUBLISH “The Next Stop”

Bob Thurber is a master of flash fiction. This brilliant piece deftly paints a scene and pulls us along. We see each of these unidentified men, yet we don’t see them. It contains just enough detail to let our imaginations do the rest. Good fiction speaks to different readers in different ways. Maybe you see this piece as a metaphor for something more profound, where the men are secondary (the author’s intent)? Maybe you focus more on the men themselves and what they’re looking for (what we saw). Maybe you see both and a little of yourself in them as well.

5 comments on “THE NEXT STOP by Bob Thurber”