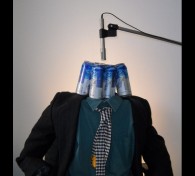 “Tonight we have for you,” boomed Michael Guy Alright in hearty tones, “some guests who will really get your synopsis racing.”

A rather distraught looking woman sat next to the handsome Michael Guy Alright. She had mousy, flyaway hair and washed out, frantic blue eyes; in her lap, her hands twisted repeatedly, wringing out a very wet, very invisible cloth.

“First, our lady of conviction, Deirdre Enaine, founder of The Organization for the Defense of the Undead.

Before anyone could say anything, Deirdre began to talk; she had a breathy, nonstop exhalation of speech that had no discernable beginning or end.

“I keep hearing all this about the unborn.

“How come no one ever mentions the undead?

“In all the films, horror movies, made for TV movies, documentaries, I have ever seen about the undead,… they appear to have no rights!

“They can be killed, murdered,… well not exactly murdered,” stammered Deirdre breathily. “I mean you can’t murder a dead person, but they can be stopped. We (at The Organization for the Defense of the Undead) call it denotsoreallyalived.

“They can be denotsoreallyalived by any means whatsoever! Society seems to approve of this senseless killing… well, not killing exactly (you can’t kill the dead) but ending. We (at The Organization for the Defense of the Undead) call it ending. Have you seen these movies? They are shot at, stabbed and,… and everything.”

Deirdre inhaled. “And the name, I mean the undead, it’s racist, well not racist, but sexist; well not exactly sexist but it’s wrong! It’s… aliveist. This is a person we are talking about! Not a living person, but a person nonetheless! We in The Organization for the Defense of the Undead want to institute a name change. The notsoreallyalive. We should call them the notsoreallyalive.

“Thank you, Deirdre,” cut in Michael Guy Alright smoothly, “and now I’d like to introduce our next guest… one of the most influential thinkers of our time. Sir, this is indeed an honor. Please put your hands together to welcome… Six-Pak Chopra!”

The audience exploded in cacophonous approval.

“Sir,” continued Michael Guy Alright, “in this time, when so many people seem to suffer from insecurity, when so many seem to feel they aren’t successful enough, rich enough, pretty enough, or just plain good enough,… you, sir, have cut through the chaos.

“You sir, have set forth a simple, comprehensive plan for an easier, dare I say it, a happier life.

“In your Simple Philosophy for a Better Life (a practical guide), you have proposed a solution to not just some, but all, of life’s problems. It is as though you have managed to distil all of our insecurities and problems down into a single perturbation! And what is even more impressive, sir, you have given us a specific solution!

“Really, it was easy.

“So many people in life worry…. Well, I say why?

“If sumthin’s botherin’ me, I could pout, I could sulk. But NO! Life’s too short. So whadda I do?

“I could worry about stuff, I could try to ponder about it, but I ask ya, will that really help? Will ya really feel better if you sit up and THINK about stuff?

“I take a deep breath; I sit right down and pop open a brewsky.

“A few of the little sweeties, and you won’t even remember what your trouble was!

“Say I got the hots for some broad, but the chick don’ come through. Do I sulk?

Do I mourn? Hell (I mean heck. Sorry, Michael) no!

I get some chips, turn on the tube and open a cold six pack.

“Say work’s gettin’ me down.

Just open that six pack and chug your troubles away!” Six-Pak burbled modestly.

Michael Guy Alright gazed at Six-Pak with ill-concealed reverence. He spread his beautifully manicured hands in an expansive fan as if to say, “What can I add to such eloquence?”

After a sufficient pause, Michael Guy Alright drew in a deep breath, “As if one savant in the family weren’t enough… let me introduce Six-Pak Chopra’s cousin, an equally deep philosopher, Shallow-Pak Chopra.”

The two men seated beside Michael looked to supply a “nature vs. nurture” study. Although seemingly related by the straightness of nose, blueness of eye, and lush, curly brown hair, the final product yielded complete opposites. Six-Pak was a substantial, meaty, red-faced man. His clothes, like most deep thinkers, who were more concerned with the weighty matters of happiness and fulfillment than fashion, were unkempt. His stained shirt was partly untucked, and he could have benefited from a shave. Shallow-Pak on the other hand was immaculate. His curls were perfectly coifed and glossy. He was wearing a beige Angora sweater that was slightly open to reveal a peach-colored, raw silk shirt. His khaki pants were perfectly pressed.

“I agree with Six-Pak. I mean life is just too short to fret.

“Like I could listen to the news and get all depressed, but like, I mean really, why?

“When I get down, do I fret? Do I contemplate my navel?” Shallow-Pak giggled and coyly glanced down at his stomach.

“NO! I just get myself down to the mall and BUY some cute thing. You’ll just simply be amazed at how much better that can make you feel!

“This little bi—uh, witch—(he giggled coyly) of a girl didn’t want to go out with me. So what should I do? Sit home and cry? No. I went out to the mall and found these simply adorable shoes.”

He stretched out tan, suede shoes to the audience. The fat, elderly women in the crowd inhaled with approval.

“Better drink than down,” boomed Six-Pak with a belch.

The applause was tumultuous!

E. E. King is the award-winning author of, Dirk Quigby’s Guide to the Afterlife. “Impish and delightful, a hilarious Zagat’s guide to heaven!” Ray Bradbury. And of Real Conversations With Imaginary Friends, an anthology of short fiction, Ray Bradbury says, “These tales are marvelously inventive, wildly funny and deeply thought provoking. I cannot recommend them highly enough.”

She has been a speaker and teacher at the Ojai Writer’s workshop and The San Miguel Writer’s Conference, performing “literary stand-up.”

Her newest novel, The Card Game is being serialized at www.IsotropicFiction.com and will be released online and in print December 2012.

She has published widely and is the recipient of various international writing, biology, and painting grants. Her murals can be seen in Downtown Los Angeles and Spain.

WHY WE CHOSE TO PUBLISH “The Talk Show”

In this piece, author Elizabeth King mocks more things than we would have believed possible in just over 1000 words—and we chuckled at every line. Technically, “The Talk Show” isn’t a story because it lacks the element of conflict. But it’s a marvelous piece of irresistible satire, and it’s a memorable one that we’re glad to have received.