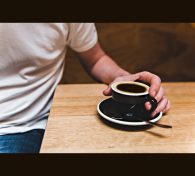 I nearly opened the menu, but instead pushed it aside to make room for the coffee I knew was on its way. The wait staff had stopped taking our order years ago. Probably sick of the joke, “What else does a person order than waffles at The Waffle Barn?” I can’t take the credit, though. Dad said it first. He’s had a lot to say, actually, over the years—I listen and I listen and then I pick up the bill.

“Let me tell you something, Charlie. I am not too enamored with where this country is headed. Thanks to this idiot in the White House, my boys in the military are out there killing themselves for a cause that only fools believe in. If I was running this country, I would—”

“Let me guess, Dad. You would let the military do their jobs and you would tell all the bleeding heart liberals and right-wing conservatives to stick it,” I said.

My father had a way of looking at a person to communicate his displeasure. It was his way of saying Are you an idiot? without actually saying the words. I was on the receiving end of this look on more than one occasion in my life and today was no exception. Not that I went out of my way to provoke him, but it also was fairly amusing to get a rise out of the old man. After two heart attacks, he learned not to get too passionate about anything. Who could blame him?

“What’s wrong with you, Charlie?” barked my father.

“I was just daydreaming is all. You know how I get when I am fresh out of bed and starving,” I proclaimed.

“That’s not what I mean and you know it, Charlie.”

“You are twenty-nine years old. You have been telling me the same sad tales for three years now. Ever since you moved into that place with those two roommates, you have regressed. What happened to you? Life is not about watching all the latest TV shows. Your best friend is your dog for God’s sake. I thought that if I laid back and let you figure it out, then it would all work out. You have sat around acting like the world is going to hand you the blueprint.”

In the midst of my father’s rant, I found myself just nodding my head as I blankly stared through his eyes.

“Do you strive for mediocrity?”

Sarah, our waitress, inadvertently cut off my father to present our meals. I politely thanked her and watched my father dig right in to his plate of waffles. I had to say something and forgo my sweet tooth for the moment.

“I have never been in a situation where I just had to get my work done or else. Never! All I can do is thank all the people around me in my life that have given me a safety net throughout my life. That said, I know that I have no real motivation, self or otherwise, to get ahead in life. I can see the good in putting in hard work. It just doesn’t stir me into action. It just doesn’t matter to me either way. The highest highs and the lowest lows produce the same reaction. I just shrug my shoulders. In my little world it doesn’t matter much to me, and I tend to believe it doesn’t matter much to any of those people around me. I am the guy people know through association with another person. I am Terry’s brother or Peter’s friend. Half the time, people can’t even remember my name. It is as if I am just a ghost, and I accepted this role many years ago.”

My long-winded response had managed to capture my one-man audience. The waffles had cooled off and the coffee cups remained filled. Even our waitress had managed to sense the emotion at the table because she avoided us for an extended period.

“I realize the exaggeration that is coming out of my mouth, but it feels very real to me on a daily basis. It is as if I appear for temporary moments in the day. Poof! Back to daydreaming my life away. I am always attaining goals years after they would have had any significance to my growth as a human being. All because I didn’t know what it really meant to do work. Eternally waiting should be a motto I tattoo on my body to signify my self-awareness of what I truly am. Only now, Dad, do I accept truths that have always been evident to me.”

I turned my attention to Sarah as she tapped my shoulder and handed me the bill for the breakfast that managed to go unfinished. I could feel the pity she had for me as she walked away. I had become an excellent observer of body language, and she exhibited many of the symptoms of a person who wants to help but has no idea what to say. A lack of eye contact is a major giveaway. Sarah also brought her hand to her mouth as she handed me the check. Nervous habits or ticks rear their ugly head come times like this. It is difficult to act normal or relaxed when you just are a tense ball of misguided sympathy. The phrase most commonly uttered about me by first-time encounters with people is “poor guy.” Unfortunately, I had managed to make long-time acquaintances have the same exact reaction more and more nowadays.

“Charlie. I have no clichéd quote to guide you on the path in your life. Honestly, there is no right or wrong path. The only path that exists is the one you make for yourself. A life worth living is one that hasn’t been lived before and won’t be lived afterwards. You have to believe in something. Otherwise, you just go around playing a role.”

“What if I am too late? What if I can’t break the cycle? What if I am just a whole lot of lip service right now and back to my old ways come tomorrow? What do I do, Da—”

“I cannot tell you what to do.” His sudden animation startled me. “You can’t follow my path. My only advice to you right now is that you should never reach a point in life that makes you stop. Don’t ever stop and admire your work. That is the sin of the procrastinator.”

“That is exactly what I do. I work hard to get seventy-five percent of the way and then I shut it all down. I know I am always supposed to be growing and learning. I just have to become something. Being nothing is just an empty, meaningless life. At least if I try to be something, I can say I was more than just a title someone else gave me.”

I looked across the breakfast table at my father. He smiled and rose from his chair and stood next to me. I looked up at him as he placed his hand on my head. I felt like I was four years old again as he attempted to tussle my hairless head. I followed close behind and headed for the front counter to handle my bill. Sarah had her back to me as she spoke with one of her co-workers. She said something about a broken heart and “his father died two years ago.”

“So that’s who he’s talking to across his table?” the co-worker asked.

“Thanks again, Sarah,” I then said. “Guess my eyes were more ambitious than my stomach. See you next week.”

She smiled, and I left. Guess I am still just waiting.

Richard Bauer is a writer of fiction. He is based out of Sacramento, California.

WHY WE CHOSE TO PUBLISH “The Waffle Barn”

Richard Bauer’s unassuming story with its unassuming title doesn’t grab you by the throat. It seems to be little more than a story of a father who, over the years, has given fatherly advice to his son who isn’t listening. The story is delivered at just the right pace to hold our interest. Nevertheless, we can sense something else, something vague, underneath this story. And then we get the unexpected gut punch at the end, all perfectly set up without us realizing it.

We loved one particular line in this story, words to live by: “A life worth living is one that hasn’t been lived before and won’t be lived afterwards.”

One comment on “THE WAFFLE BARN by Richard Bauer”