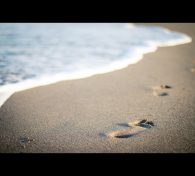 Looking back, we’d been so faithful to each other, which is more to say than a lot of people. I think this is especially true these days, in this day and age. The trials and tribulations had been daunting at times, but we’d made it. We were strong and had never given up the fight. All those times we got banged up, scraped, bruised, knocked down, and then helped one another get back up.

Some days it was like getting stampeded by a bull, thrown under a bus, pulled across the pavement, rolled through the gravel, stuck knee-high in mud, or like belly-smacking the water on the way down from a freefall from gravity’s pull. There were many things we couldn’t control, even then.

Nonetheless, we’d been there for each other through it all—the thick and thin.

And then we had kids and we cared for them as our parents did us. Rocked them to sleep. Kissed their booboos. Bandaged their cuts. Held them when they cried. Helped reduce their fevers.

We watched them get hurt (broken bones and broken hearts), sometimes in sports and leisure activities when their guard was down, or when it was just another hard lesson learned.

And that big step, when we had bought each one their first car, after we and they thought they were ready for the roads.

By the time they were young adults, we anticipated their having kids and enduring all the hardships amid the making of memories. Each time we looked back and remembered those times of endurance, I think it’s like we were being tested as a way to become stronger and more resilient—for us and for them.

That time you helped me out of the car from my toe injury. I had simply lost my balance and down I went, the sharp metal tooth of the rake going right through my big toe. How I was so angry at myself for being clumsy.

That time you had sepsis and it seemed like you’d never be discharged from the hospital, but made it through (just before that virus spiraled out of control, and what a wild ride that was!). So many more had been admitted to hospitals all over the world shortly after your stint.

There we were, just you and me, on a Florida beach on the gulf side. The waters were so calm and so relaxing. We were barefoot in the sand. A hurricane could have come, or some other natural disaster, and it would have been okay. We weren’t afraid of death, just as long as we were together.

We got up, held each other’s hands, and walked along the shoreline with the water wading over our feet. I had a scar under my big toe and you had your scars (C-section, knee injury, etcetera), and we had arthritic aches and pains. Regardless, the sun was shining upon us as we walked toward the sunset. The warmth of the light and the coolness of the saltwater at the same time: both made it memorable. And we still had our memories, no Alzheimer’s, and for that we were grateful. We smiled and laughed as we talked about our kids, their kids, and our great-grandbabies.

Our skin was wrinkled, even more so from the water now, but the aging process was part of what helped us feel whole. It’s like it was a piece of life’s puzzle that was always missing, and then with age we got wiser, bolder, and more appreciative of what we still had. And the wisest of all lessons was that money could never buy the most precious gift, which was love.

“Perhaps we won’t die together, a perfect ending like a Romeo and Juliet fairytale,” you had said. And you having said this had made me think about the famous painting, the one that shows the one set of footprints in the sand where God always carried us through the hard times, just his footprints.

We were on a beach again, just you and me. We had talked about soulmates and how we wouldn’t have wanted it any other way, destined for each other.

We had talked for hours, like when we had first met and couldn’t get off the phone, our parents always wondering how we had so much to talk about.

We walked hand in hand.

“I don’t know about you, but I feel lighter on my feet,” you had said, “and is it just me, or is the sunlight getting brighter?”

I caught you and cradled you in my arms like a child and whispered in your ear, “I love you.”

You closed your eyes, and I picked you up and carried you toward the sunrise.

I kept looking at the sun as it rose above the horizon until it got brighter and brighter, and I kept walking until I too felt lighter on my feet—even with you still in my arms—your words still echoing through my mind.

I had no regrets. I was ready. We both were.

The author was born on Independence Day, lives in Ohio (US), and graduated from Kent State University in 2016 with a BA in English. He is happily married to his best literary critic, Melannie. He has two sons, Michael and Alexander, both of whom continue to keep him active and young at heart. He draws a lot of his inspiration from the creative things he overhears his kids say and the stories he reads.

WHY WE CHOSE TO PUBLISH “Thick and Thin”:

What a beautiful way to summarize a life and a relationship. Author Chris Baum takes the reader through four symbolic sections of life, calling them “quarters” instead of the often used four seasons approach of birth, maturity, decline, and death. We found it a refreshing reflection showing that, while individual events can affect and disrupt our lives, our core values maintain the foundation upon which our lives are built.