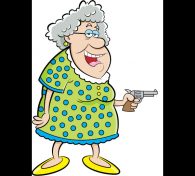 Sunlight poured through the front window, cutting the floor into sharp triangles. The bartender, sleeves rolled to his elbows, stood wiping the fingerprints from a bottle of Four Roses when the two old ladies walked into the bar.

“Can I help you?” the bartender said.

“Do you think that this is the right place?” Harriot said.

“Of course it is. I checked the address, twice,” Janet said, wrapping her lower lip over the upper, forming an expression reserved for the toothless.

The bartender waited as the two old ladies huddled together. After a minute he picked up his rag and went back to polishing bottles.

The bartender turned back. “Yeah.”

“Never would have guessed,” the bartender said.

“Well, mother always told us it’s good to know who you’re speaking to,” Janet said. “We could have married brothers.”

Harriot started to dig through her purse.

Janet looked at Harriot, “Don’t tell me that you forgot it.”

“Let me know when you ladies figure things out,” the bartender said.

He went back to the bottles.

The bartender glanced over his shoulder to see the gun shaking in Harriot’s hands. “What the hell?”

“Look ladies, I’ve got as good a sense of humor as anyone, but this isn’t funny. Now, put that thing away before I come around the bar.”

Harriot pulled the trigger. The mirror behind the bar shook, and the bartender fell. Dead.

“What should I do?” Janet said.

“Go around to the cash register and take the money out. Do I have to explain everything to you?”

Janet pivoted on her cane and went around back. When she got to the bartender’s body, she grabbed the edge of the bar to steady herself and lifted her foot over his head.

Janet opened the cash drawer and slid the bills from under the spring arms.

“How much?” Harriot said.

“Oh, I don’t know exactly. Let’s see, twenty, forty, fifty… There are lot of rolled coins. Should I take those too?”

“Don’t be ridiculous. With your arthritis you’d never be able to carry them.

Harriot went to the front door and parted the curtain. When the coast was clear, she opened the door and stepped out onto the sidewalk.

When Janet came outside, Harriot said, “That’s the third one this month, we’re doing well.”

“I still can count,” Janet replied. “And I know. We need to take the Greyhound. Can’t rob too many in one town.”

Harriot started to walk down the street.

“Wait,” Janet said rapping her cane on the sidewalk. “My feet are killing me. There’s a diner across the street.”

“I’m tired. What’s the sense of having money if you don’t use it?”

The two old ladies walked into the diner, then navigated to a table in the back. Harriot reached into her purse.

“Quiet. I was just looking for my lipstick. Like mother said. Always look like a lady in public.”

While Janet gummed on a chicken club, Harriot scribbled on a piece of paper.

“I was thinking Buffalo,” Harriot said.

“If we’re going to get enough money for, you know what, we need to think bigger.”

They stepped out of the bus terminal and craned their necks, first up and down then side to side.

“Look at those buildings,” Harriot said.

“And all these people,” Janet replied. “What should we do?”

“We should get started.”

They walked down three blocks and stopped at a flickering neon sign: THE PINK FLAMINGO. Harriot cupped her hands to the window while Janet glanced down the street.

“No one’s inside,” Harriot said.

“Of course not. What respectable person would go into a bar this time of day.”

Harriot wrapped her fingers around the pull, braced her feet on the sidewalk, and opened the door. Pans rattled in the kitchen and a moment later a man emerged. He was decked out in a leather jacket and flat cap. Streaks of sweat ran down the side of his face. He looked up and saw the two old ladies.

“What the hell youse doing in here?” he said.

Janet put a finger to her lip. “There’s no reason to be rude. And I must say your use of language leaves much to be desired.”

He stared at them and grunted. Then he took a screwdriver from his pocket and went to the cash register.

Hariot bent to Janet and whispered, “I think we have competition.”

“What should we do?” Janet said.

“You shouldn’t be doing this.”

The man laughed and went back to the register.

The man turned back and saw Harriot holding her gun. “What the—”

He reached over the bar and grabbed the muzzle.

A boom reverberated off the tin ceiling. Bills flew from the man’s hand, and he slid to the floor.

“We need to go,” Harriot said, dancing in place.

The door flew open. Two cops burst into the bar.

“I-I shot him,” Harriot said, pointing behind the bar.

One of the cops went around back. He looked down and kicked the body.

The cop took a stirrer and picked up the gun from the bar.

“I’ll be damned,” the other cop said.

“Sorry ma’am,” he said. “But you just shot a criminal. Someone’s been robbing bars this end of the state for weeks now. Just yesterday he shot and killed a guy in Elmira.”

“You gals are heroes. They’ll be a reward.”

Harriot and Janet looked at each other and smiled.

While they waited for the reward money, the two old ladies stayed at the downtown Hilton. Guests of a grateful public.

The two old ladies sat in a hotel room in the heart of the city.

“Just don’t let it go to your head,” Janet said as she scratched out figures on the hotel stationery. “Minus the hotel expenses we’ll have over two thousand dollars left.”

“I know how to count,” Harriot said. “Now we’ll have enough to bury mother. She was starting to get stinky wrapped up in that damp basement.”

“In the meantime, what should we do?” Harriot said.

They got off the elevator and strolled arm in arm through the lobby. And two old ladies walked into the bar.

H.E. Vogl is a retired professor who has turned to writing fiction. Vogl’s work has appeared in Fiction on the Web, Bewildering Stories, Every Day Fiction, Fabula Argentea, and Crimeucopia, an anthology from Murderous Ink Press.

WHY WE CHOSE TO PUBLISH “Two Old Ladies Walk into a Bar”:

The title alone makes this an irresistible read, and after reading it, we agreed it was more than worthy for our magazine with its delightful humor. We loved the double surprise and completely unexpected ending.

TO ERR IS HUMAN, TO FORGIVE IS OPTIONAL by Robert Balentine, Jr.

DIARY OF A WIMPY KITE by Jane Brown

THE FALLEN by Mike Murphy

THE SPEAKING QUEEN by Zary Fekete