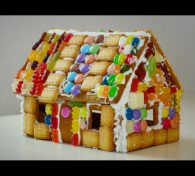 Ginger dashed through her kitchen, choking on a thick cloud of smoke. She swished a dish cloth this way then that, clearing the air, before using the same cloth to snatch a flaming tray from the oven. With it held at arm’s length, she rushed from her gingerbread cottage and flung the burning pastries into the surrounding forest.

“Oh, cinder-crisps!” she growled as the charred dough balls sizzled then fizzled out.

It was the third batch of pastries she’d burnt that day, and deep down inside, she knew she’d burnt them on purpose. The choux pastry was the favourite dessert of Lacey, the woman who lived in the shoe. Ginger and Lacey had been lovers, and despite Ginger putting her heart and soul into the relationship, Lacey walked all over Ginger then booted her out. Each batch of burnt choux pastry took Ginger a small step towards healing, but at this rate she’d run out of flour before she mended. She needed a better remedy.

“Hello!” a gruff voice called from the shadows of the trees. “Is that smoke my keen nose detects? A forest fire?”

“Pastries,” Ginger replied. “Or more accurately charcoal. And the only fire will be in the belly of the squirrel who devours them.”

She scanned the tree line, spotting a pair of glowing eyes, then a figure emerged from the gloom. He was a tall fellow with a face of silver hair, and whiskers and a tail to match. Ginger licked her lips as she looked him up and down. After spending time with the leathery shoe lady, the hairy stranger was a welcome sight. His pointed ears twitched as she spoke.

“Pleased to meet you,” the stranger replied. “I’m Mr Wolf, but please, call me BB.”

“Will you stay for afternoon tea, BB? I have many sweets, most free of charcoal.”

“Off to the palace?” Villagers had been passing all day. The prince had found a glass slipper and vowed to marry whoever it fit.

“Not to the palace,” BB said. “I’ve a dinner date with First Little Pig. But surely a lovely lady like you will be presenting herself to the prince.”

Ginger smoothed her apron over her generous belly as she tittered. It had been a long time between compliments. “Goodness no, I’ve no interest in the prince.” She eyed the bushy wolf up and down before hurrying on. “He’s too smooth-faced for my liking.”

“And the glass slipper doesn’t interest you?”

Ginger winced and fought off thoughts of Lacey. “I want nothing to do with any fancy shoes. I’ll stick with sheepskin boots.” She poked her foot out, presenting a tan-clad foot.

BB smiled, showing large teeth. “I like your style, Ms Ginger. I too enjoy wearing sheepskin from time to time. I have many uses for sheep, actually.”

“Such as counting them on sleepless nights?”

BB tipped his head to the side. “That never crossed my mind. But speaking of night, it will be here all too soon. I must be on my way. Nice meeting you, Ginger.” He flashed his teeth again and swished his tail, then dropped to all fours and bounded into the trees.

After he was gone, Ginger remained by her door, smiling. It had been too long since she’d smiled so easily. “What a nice chap BB is. What a veeery nice chap.”

With a sudden hunger gnawing her belly, she rushed inside and baked a dozen heart-shaped cookies. While they were hot and steaming, she wolfed them down.

Long after dark, BB lounged in First Little Pig’s backyard. BB had decided to stay outside the house because the straw structure triggered his allergies. Plus, the inside was a mess, pork chop bones strewn everywhere. He’d gorged himself so greedily on the tender morsels, he had no energy left to blow the house down. He groaned and gurgled on First Little Pig’s beach chair, too bloated to sleep.

Ms Ginger’s insomnia advice came to mind. It was a strange idea to count sheep instead of eating or impersonating them. Almost as strange as eating cake. But the lovely lady seemed sure it would help, so BB had to try it. He imagined sheep and counted them, then when that didn’t work, he imagined them leaping gracefully over Ginger’s cottage. Then finally he forgot the sheep all together, instead picturing Ginger. What a lady. She might lack a tail, but she had a generous rump, and the flour dusting her hair and clothes created the impression of silver fur. With a vision of Ginger floating through his mind, BB was finally able to close his eyes and dream.

Ginger had always been a plodder when she walked—doomph, doomph, doomph—footsteps that would make an ogre proud. But following her meeting with BB Wolf, she barely felt the floor beneath her feet. Love made her light, and though she knew it might lead to an unhappy ending, she didn’t fight it. She made a dessert each day in the hope of enticing BB into her cottage if he happened by. On the seventh day, he appeared.

“I’ve missed this candy cottage,” he said in greeting, “and the sweet lady within it.”

“Will you stay a while, BB? I have Black Forest cake.”

“Alas I cannot, I’m having lunch with Second Little Pig. A work lunch to discuss his home.”

“Are you a realtor?”

“No, nothing that evil. I work in demolition.”

Ginger grimaced. “Your work sounds fulfilling, but it reminds me of the children who sometimes pass by here.” She gestured at the walls of her gingerbread cottage that was missing many biscuits and was scarred with tiny teeth indents. “The local children often try to demolish my home.”

BB’s jaws opened wide and his yellow eyes stretched round and large. “But your home is a work of art. Much better than straw, sticks and bricks. The children who vandalise it should be punished.”

“Maybe once they are a little fatter,” Ginger replied. “Are you sure you won’t stay for a snack, BB?”

He shook his head. “Alas, I must save my appetite for my meeting.”

The stick home had been easy to blow down and even easier to reconstruct into a cooking-fire. BB fried bacon strips until they were as crisp as planks and crunched them between his teeth. He should have felt satisfied, yet he didn’t.

“There’s something missing from my life, but I don’t know what.” As he pondered, he played with his food, then startled when he realised he’d built a bacon-strip cottage surrounded by tall bacon trees. “If only I could figure out what I needed,” he sighed, then chomped on the cottage until he was full.

Another week later, BB reappeared at Ginger’s home. He was more handsome than ever, with his fur neatly combed.

“Care for a cookie?” Ginger had made them in the shape of little pigs, since BB seemed so fond of them.

Later that day, she heard shouting from the forest. Hoping it was BB returning, she raced outside, but it was just a little boy. At first, she thought him one of her cottage-demolishers, but he was far too busy shouting to eat.

“There’s a wolf in town,” he bellowed as if she was deaf. “He’s at Third Little Pig’s house, eating a ham sandwich.”

Ginger was a dessert girl, and knew little about meat, but she knew pigs were made out of ham. She released a long “ahhhhh” and laughed. No wonder her sweets hadn’t enticed BB inside. He preferred the taste of meat.

“I must go,” the boy shouted. “I have to tell everyone about the wolf.”

“Or you could just stay here,” Ginger said, a plan forming in her head. “Come inside my cottage, little boy, and tell me all about it.”

The boy’s face brightened. Being such a rowdy child, he was probably more used to being shushed than asked to speak. With a smile, he followed Ginger inside.

After eating his fill at Third Little Pig’s house, BB had felt strangely unsatisfied. On a whim, he’d gone next door to Granny Red’s home.

BB stood in her kitchen, stirring a stew made from meat far too old for any other use. Without even tasting it, he knew it wouldn’t fill the emptiness inside him. He needed something else, something different, but what? All at once, the answer came to him. He wanted another visit with Ginger.

He wasn’t sure why he liked the gingerbread lady so much. They were nothing alike. She was furless except for a head of red curls, and she didn’t have the right number of legs. Plus, she had a strange, twisted love for flour and sugar that he’d never understand. Still, he longed for her company even if it meant eating the occasional cake.

He set the stove to simmer and hurried for the door.

When BB arrived at Ginger’s cottage, he met a most delicious aroma. It wasn’t cake for a change, but meat. The air smelt of snips and snails and puppy dog’s tails. His favourite! As he licked his lips, Ginger appeared in her doorway.

“Just passing by?” she asked.

Ginger’s eyes narrowed. “My company or my cooking?”

“I came for you, I promise.” BB grinned. “That delicious smell is just the cherry on top. May I come in?”

Ginger smiled and stepped aside, allowing him entry.

BB proved to be a true gentleman. Not only did he eat everything on his plate, he insisted he help clean the dishes. Lacey hadn’t once helped Ginger tidy.

As BB handed Ginger a suds-covered saucepan, worry rose in her belly. How was she going to keep a catch like BB interested? The way to a wolf’s heart was through his stomach, but where would she find a regular supply of his favourite dish? She could snavel the greedy, little vandals who sampled her cottage, but it might not be wise to forage in her own backyard. She should shop further away. But where? The answer formed like a perfectly risen cake, and it stretched her face into a grin.

From now on shopping day wouldn’t just be a trip to the grocer. She’d follow it with a sneaky visit to the woman in the shoe. With so many kids, Lacey wouldn’t miss a few.

Gina Burgess is a writer from Tasmania. Her stories take readers into off-kilter worlds where the clarity of light and dark is lost within grey areas. When not writing, Gina creates art, runs long distances, and travels across Australia in pursuit of her favourite bands.

WHY WE CHOSE TO PUBLISH “Way to a Wolf”:

There’s little doubt that the imagination of author Gina Burgess worked overtime on this delightful tale that’s so skillfully put together from familiar fairy tales. Yet the unexpected ending gives us something new and makes us smile, although we’re sure that ending is just a bit askew of what some would consider politically correct. But it’s a fairy tale, and we’ve come to learn that many of the stories we grew up with as kids have a darker side to them.