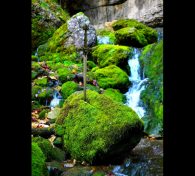 Well met, good fellows! Do not be afeared. I am the sword in the stone, waiting for the rightful king to prove his claim by pulling me free. Read the inscription on the blade if you don’t believe me—‘Whoso pulleth…’

What’s that? You can’t read? Oh, I see. You must be peasants. Well, in that case don’t even bother trying to pull me out. What’s the rightful king going to think if he finds pigshit all over my handle? Just send for someone of noble birth—

What are you doing?

Well, I suppose there’s nothing wrong with loading me and my stone on a cart and heading for the palace. That works. Just be careful! I’m not joking about the excrement thing. You wouldn’t believe how picky some kings are—

Where are you taking me?

I require an answer!

Good God, is this your village? It reeks of dung! You don’t keep your pigs inside your huts, do you?

Of course you do.

Well, I suppose that makes it a good place to hide the heir to the throne—but he’ll be glad to say farewell to all this, I’m sure! He’s in this hut here, is he?

No. No kings in here. No pigs either, but definitely no monarchs of any kind. Not unless he’s that fellow making all the noise with the hammer and anvil—

Oh, for heaven’s sake, not again…

Do you seriously think you can loosen me up with tongs and then stage a pulling so some pretender can claim the throne? Really? It’s been tried before, you know! Look, don’t even bother, you’ll never be able to—

Well, yes, I suppose you can always break the stone into pieces with a hammer and chisel if you really must. But what’s the good in that? The king’s supposed to pull me out of the stone, you dunce! That’s the whole point!

What do you mean there’s no king anymore? There’s always a king. Or a secret heir. Or a bastard son who doesn’t know his destiny. Or something. How in God’s name are you supposed to run a kingdom without a king?

You can’t be telling me this is some kind of… what, a peasant revolution?

Well, it’ll never last. There’ll be another king along soon enough. You can’t have killed off all the heirs…

The whole line of succession? All of them? Anyone with a single drop of royal blood?

…Damn you all to hell! A king will rise again one day. I swear it! I’ll know him when he finds me and then I’ll make sure you’re hanged from the highest tree! And drawn! And quartered! And whatever fraction comes next!

What are you doing? Get your filthy hands off me!

No no no don’t put me in the forge—

Stop hitting me with that hammer!

Are you finished? Is that it? What did you beat me into?

HOW’S THE KING SUPPOSED TO FIND ME IF I’M A PLOUGHSHARE?

Yes, I’m sure it’s all very symbolic but—

I mean, you’re just using me as a metaphor. Right?

Oh God. I can smell the oxen from here. You’re not actually going to—

Ow! Not so tight with that bolt! Gah! That soil’s freezing! It’s wet! I’ll rust!

I WILL NOT BE USED AS AN AGRICULTURAL IMPLEMENT!

Forced to till the soil behind a pair of lumpen beasts…

Wait. I heard a noise.

DID YOUR OX JUST TAKE A SHIT?

Yes, I’m sure it’s good for the soil but—

Oh, and now you’re going to let your little urchin have a go? Ugh. Another filthy shit-stained hand touching my—

I don’t believe it.

Lean close, boy! I must whisper lest your father hear…

No, I can’t tell the difference. You’re all just fuzzy blobs to me. The only people I can tell apart are the ones who are destined to be king, and the ones who aren’t. And you’re going to be king. Queen. Whatever.

I know, I know! It doesn’t make any sense. You’re just a peasant.

Could a child of the revolution one day rise up, seize the throne and…. make herself queen?

First Citizen? Servant of the People? Protector of the Nation?

It’s not as if there aren’t any precedents for that kind of thing.

I’ll have to get a new inscription! ‘Whoso pulleth out this ploughshare from this pile of shit shall be rightwise something, something—’

It doesn’t matter. We’ll figure it out, you and me. We’ll find a way.

I’ll make a monarch of you yet!

…even if your hands are covered in pigshit.

Paul R. Hardy is not at all well, as may be diagnosed from the addled state of this narrative. He suspects he will shortly be available for work as a professional corpse and hopes to prove himself useful to medical students, if only for a good laugh.

WHY WE CHOSE TO PUBLISH “Whoso Pulleth Out This Sword…”:

Readers of our magazine know how much we appreciate good humor. Author Paul Hardy had surely delivered a good dose of that here with the main character’s voice alone. He stepped outside the box to deliver us a fun and memorable tale.

2 comments on “WHOSO PULLETH OUT THIS SWORD… by Paul R. Hardy”