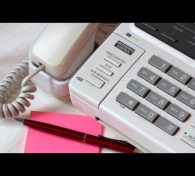 It was very late, but the flashing light on the phone would not be denied. “You have one new message,” the female voice told Brent. “Message one.”

“I wanted to see how you’re doing,” she said in that quavering, high-pitched voice of hers. “Your mother told me you started your own computer company. I’m glad for you, dear.” She paused briefly, as though expecting him to pick up. “Do you remember that sweet Allison Kemp from the old neighborhood?” she went on. “She got married. A nice man. A doctor, I think.” A longer pause this time. “Are you there, honey? Pick up the phone if you are. I hate talking into these machines. Oh well. Goodbye, sweetie.”

“You have one new message. Message one.”

Brent yawned. “I sure am,” he said, looking out the window at the twinkling stars.

“Don’t work too hard now. I’m proud of you, even though I don’t understand a thing about computers. I hope you’re getting some good food to eat—not that greasy stuff at those miserable fast-food places.”

“And you have to get enough sleep,” she went on. “Dr. Marcus told me yesterday that the human body needs one hour of sleep for every two hours it’s awake. That’s why people think of eight hours of sleep and sixteen hours awake. Get it?”

“Eight hours of sleep? I wish!”

“I have to find the time to call her back,” Brent said, rubbing his bloodshot eyes.

Grandma coughed a few times—not realizing she was being recorded—and then started leaving her message, “Hi, sweetie. I seem to have a touch of something. Dr. Marcus did some tests, and he’s going to let me know what’s the matter. I’m sure it’s nothing. Just a little tickle in the back of the throat—like when you eat too much ice cream. You remember how you loved rocky road as a little boy?”

“Still do,” Brent said, fondly remembering their many Sunday visits to the ice cream parlor.

“Anyway, call me when you have a chance. I worry about you. Goodnight now.”

Grandma sounded horrible. Her voice was raspy and she could hardly talk without coughing. “Hi, sweetie. I’m still waiting on those tests, but I seem to have caught a bad cold—probably from Marge Sangster at the senior center. I’ve told you about her.”

“She always looks like a glazed doughnut. I’m sure I’ll be feeling better in a few days.”

“I look forward to seeing you at Thanksgiving. You are coming over for my world-famous dumplings, aren’t you?”

“Thanksgiving?” He was surprised. “I haven’t talked to her in that long? Shame on me.”

“Best of luck with the computers,” Grandma said with what remained of her voice. “Love you. Bye-bye.”

The message light was blinking. It wasn’t who Brent was expecting. “It’s Mom,” he heard. “Grandma’s in the hospital. It’s… It’s not good.”

The phone on Brent’s desk rang. He answered it quickly.

“It’s your mother,” the teary voice on the other end said.

“I’m almost ready to leave for the hospital. I just have to finish one—”
“Honey, don’t… bother.”

“A few minutes ago.”

“You were getting home very late, son.”

Brent sniffed. “I never… never had the chance to say goodbye.”

“Not many people did,” his mother explained. “She went very fast. I guess that’s a blessing.”

Brent poured himself some brandy. He put the bottle down on the table and lifted the glass into the air. “To you, Grandma,” he said, misting up. He threw the drink back quickly and thumped the glass down.

He noticed the flashing light on the phone. “You have one new message,” the voice said. “Message one.”

He pressed the delete button. “Message deleted,” the voice said. “End of messages. You have no new messages and nineteen saved messages.”

“They must all be from Grandma,” he said, with a chuckle. “I guess I never deleted them.” He started to pour himself another brandy, and the thought hit him.

His fingers danced over the keyboard. First, he copied the saved phone messages to his laptop’s hard drive. Then, he programmed the computer to slice and dice the messages into as many variants as possible and combine them into—among other things—grammatically correct sentences.

After a few mouse clicks and a little more typing, it was time for a test run. With some trepidation, he breathed deeply and pressed a button on the keyboard.

“Brent, it’s Grandma,” he heard. Her recorded voice was a little choppy, but he could fine tune that later.

“Good to hear from you,” he said happily.

“You too, sweetie. You’re sure you’re not too busy to talk?”

“Never too busy for you, Grandma,” Brent replied, settling in for what he hoped would be a long conversation. “Never too busy… ever again.”

Mike has had over 150 audio plays produced in the U.S. and overseas.

His prose work has appeared in many magazines and anthologies.

Mike is the writer of two short films, Dark Chocolate and Hotline.

In 2013, he won the inaugural Marion Thauer Brown Audio Drama Scriptwriting Competition. In 2020, he came in second. For several of the in-between years, he served as a judge.

WHY WE CHOSE TO PUBLISH “Wish You Were Here”:

Author Mike Murphy is no stranger to our magazine. This wonderful short piece takes a couple of familiar themes (death of a relative and past regrets) and blends them into a strong story that takes it beyond either of those themes. He turned what could have been a mundane piece into something wonderful—and unexpected.