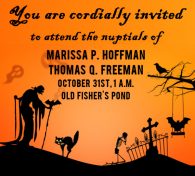 The invitations arrived by post, a thick white card with swirling black calligraphy, artistic but readable, lovely, and practical:

You are cordially invited to the nuptials of
MARISSA P. HOFFMAN and
TOBIAS Q. FREEMAN
Oct. 31, 1 a.m.
Old Fisher’s Pond

There were many unusual aspects to this invitation, the first being that it arrived on Sunday morning when the postman, along with most of the townspeople, was at church (Old Asher Greene, retired foreman of the Hoffman-Sheridan Mill, was home sick with a chest infection and was forced to wait an entire hour before sharing his distress with his son and daughter-in-law). The second oddity was the date, the third the location, the former being considered somewhat cursed, and latter being nothing of note, which made it all the more notable. The fourth was that everyone had already received an invitation to the nuptials of Marissa P. Hoffman and Tobias Q. Westwood nearly a month ago, when the wedding was meant to take place. The fifth was that both the bride and groom were dead.

Though everyone was shocked, most people were not surprised (discounting the oil heiress Loretta Quinn, who fainted upon reception and had to be revived by her miniature poodles). Marissa was a perfectionist. She sewed the embroidery on her own wedding veil because she did not trust a seamstress with the treasured task. She bought her father silver bullets, not for werewolves, but because she could not imagine a more perfect image than the shine of the sun on the bullet. She swore to marry the most handsome man in town and left no stone unturned in her search for him, finally discovering Tobias among the millworkers (and though it may not have been a perfect match, no one could deny she achieved her goal). Unfortunately, when the Union called for soldiers, he answered and had the poor sense to die before shipping out (“Cholera,” Isaac Hoffman said, and the town tutted its sympathy). No one was surprised when Marissa was found hanged from the church rafters the following Sunday. She was a perfectionist, and as her nature demanded, she loved Tobias perfectly, so her heart broke perfectly.

But she could never bear unfinished plans.

The wedding was a week away, which gave the town a sufficient amount of time to panic.

“It’s a trick, written in the hand of the devil,” claimed Milly Thompson, though her assessment was easily dismissed, as everyone recognized the signature left by the hand of Marissa Hoffman.

“It’s a curse, a damnation from a doomed love,” despaired Grayson Fyne, though few believed Marissa would be so free with curses when she was so specific with all other aspects of her life.

“It’s a plea for rest that can only come at the wedding’s completion,” whispered Father Brian Fagan, and though she had seemed so peaceful at her funeral, no one could deny that the whole town still felt incomplete at the lack of a such a promisingly extravagant event.

“Shall we go to the wedding?”

It was a question on everyone’s lips. Everyone knew they wanted to go, if only to see if the ghosts would be attending as well, to see if the invitation had really been drawn from Marissa’s cold fingers. Everyone said to their neighbor that it would be insanity to go. Everyone prepared their best dress on October 30.

A storm hit that night, rattling tree branches, pulling shingles off roofs, flooding cellars, and it seemed like no one would be able to attend the wedding. But at midnight, as the church bell tolled the hour, the rain stopped. Everyone in the town stepped out of their doorways, nodding to their neighbors, recognizing their folly and commitment. They gathered by the church, then followed a plain dirt trail through the manicured forest (designed by the late yet lively Marissa), passing the trees that drooped in haphazard angles after the assault of the storm. They followed the path through the old church graveyard, its gravestones cracked or fully fallen, and then through the new church graveyard, where they were dismayed to see how the rain had softened the earth and displaced much of the lawn and many of its inhabitants. Coffins lay strewn about, sliding on the muddy grass and settling next to the more solid path, like toys discarded by a childish master (at that point several attendees considered turning back, but no one did). They followed the path down, a treacherous slippery stretch, to Old Fisher’s Pond. The storm seemed to have hit the pond as hard as it hit the new graveyard, dredging up old mill equipment, fishing gear, various discarded pieces of trash, fish, some stinking piles of vegetation, as well as the bride and groom.

Marissa had clearly joined them from her recent resting place in the new church graveyard. Her coffin was close by, crashed open, and her body had floated through the water to the shore. Her face was pressed into the soft, dark, mud, but her veil was unmistakable. Tobias was lying face-up, his body almost wrapped in those smelly weeds that grew thick at the bottom of the pond. The storm had pulled them up by their roots when it pulled up his body. His face was a sight to see, from his empty eye sockets to his silent-scream mouth, but everyone’s attention was drawn to one particular point on his forehead.

A shiny silver bullet glinted in the moonlight, lodged deep in Tobias’s skull, as clear as a signature left by the hand of Isaac Hoffman.

Alexandra Grunberg is a Glasgow based author, poet, and screenwriter. Her fiction has appeared in Daily Science Fiction, Cast of Wonders, Flash Fiction Online, and more. She is a postgraduate student in the DFA in Creative Writing programme at the University of Glasgow. You can learn more at her website: alexandragrunberg.weebly.com

WHY WE CHOSE TO PUBLISH “You Are Cordially Invited”:

We loved this delightfully light tale that makes a perfect addition to our fall issue, with Halloween not that far off. And what a perfect opening to the tale because nothing seems initially out of the ordinary in the invitation until the explanatory paragraph after it subtly pulls the reader along to that superb line beginning with “The fifth…”

All in all, it’s a marvelously done and unexpected tale with the perfect ending.