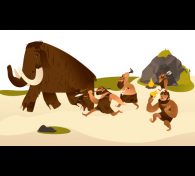 At the dawn of time, an enterprising caveman, known as Swarthy Zub, lived at the far end of the cave village. Swarthy Zub might have thought himself an “entrepreneur,” and his old friend, Not-tall Zuk, a “mentor.” But, as neither word yet existed, Zub had not articulated this belief.

Zub was a simple fur trader who would barter tree-limb clubs and flint-pointed spears for fur pelts, which he worked up into garments for the cave people. With bemusement, Zub often found that he was trading his finished garments for the very clubs and spears he’d exchanged earlier in the year. His old friend Zuk liked to expound on this phenomenon, which he called “a balanced budget,” but Zub usually just smiled and shrugged and kept on scraping hides, for he wasn’t much into politics or civics lessons.

Early one morning in the late spring, the brutish Neb schlepped into Zub’s cave accompanied by his ever-present entourage of gnats and flies. Zub steeled his features so as to not grimace over Neb’s reeking stench, nor scowl as several flies alighted on the cave walls, intent upon staying for good. Neb had stopped by to announce that the cave people had decided to appoint a king. The powerful caveman Mog was the most obvious and inevitable choice, according to Neb. With an evil leer, Neb growled, “Of course I shall handle all of the details for the king’s coronation.” Zub was wary, for he didn’t get along very well with Neb. In fact, Zub would have said there was “antipathy” between them, had the word existed at the time.

Neb smiled slyly as he laid down a single flint point and said, “Now, I have promised Mog that as king he shall wear the finest pelts that you have in your possession. And, Zub, just so you know, the king must have this new regalia by noon tomorrow!”

As Neb stepped to the door of the cave, chuckling, Zub’s heart was heavy with worry. Then his blood ran cold when Neb stopped and turned back slowly. “By the way,” sneered Neb, “I have arranged to be appointed Chief High Executioner as soon as Mog is crowned king. So, my dear Zub, I would suggest that you do not disappoint him!” With an evil guffaw, Neb stepped out into the daylight and in a cloud of gnats sauntered off down the trail to the village.

In a panic, Zub rushed about the cave. Summer was approaching and he had tanned and traded away almost every pelt that he had. What could he do, he wondered, to save his life? Just then, a shadow fell across the cave door, a very short shadow, and Zub looked up to see his old friend Zuk enter. With more than a bit of agitation, Zub explained that he was in quite a predicament (which he mispronounced as “quite a pickle”), but Zuk didn’t seem very worried. “Calm down, my old friend,” said Zuk, “calm down and tell me just what furs you do have left.”

Zub tried to keep his voice steady as he tallied aloud the pitiful inventory that remained. “Over there,” Zub jabbed his thumb over his shoulder, “I have several weasel pelts from Asia. And up there,” He waggled his finger toward his trash ledge. “I only have some winter weasel skins. So, you see? I am doomed!”

Zuk began to stroke his beard as he stood deep in thought. At last his face brightened and he said, “Don’t worry, I have a plan. Remember that exquisite tunic with matching leggings you created from scraps of leopard skin for Stylish Minx’s wedding trousseau? So, now Zub, just make the finest cloak that you can from all of these weasel furs, and tomorrow I will be at your side when you present it to our new King Mog.”

Zub was curious, but still worried because Zuk was rather short and not known to be much of a fighter. If the gift was perceived as an insult, Zuk could hardly stave off the brutish Neb and his clan. Zub stopped chewing nervously on his dirty thumbnail to ask, “How can you help me?”

Zuk smiled as he said, “Why, with my stentorian voice!” Zub didn’t recognize the word, and he repeated, “Stentorian?” Zuk laughed, “Yes, it means I bellow like a Mammoth. That’s why I was hoping for a senate rather than a king. But, go with the flow, my friend, just go with the flow.” Zub shrugged, for he rarely followed politics and he didn’t see how a speech would save his life. But Zub trusted his old friend, and so he set to work on the few bedraggled weasel pelts he had left.

By midmorning the following day, the shadow of the village day-pole had just begun to climb its shaft when the cave people gathered around with their gifts for the coronation of the new king. Accompanied by the brutish Neb and his scowling clan of clubsmen, the powerful Mog proceeded along the path toward the day-pole, smiling as he and his procession accepted the woven twig baskets of fruits, berries, fried lizards, and shiny shells presented by his adoring subjects.

At the far end of the path, Swarthy Zub waited nervously with his friend, amazed at how calm Not-tall Zuk seemed to be, considering the two of them were within a minute of getting their brains clubbed in. Just as Mog reached the day-pole, Zuk cleared his throat and in stentorian tones spoke to the people. It was then that Zub realized Zuk was more than an old friend, more than a short caveman with a loud voice, more than a bearded wise man; Zuk was a Spin Doctor Extraordinaire!

“Ladies and Gentlemen,” Zuk bellowed, “in a few minutes Neb and his Royal Guard of clubsmen shall have first choice of the ladies with whom to dance in a celebration promenade for our new king, Mog the Magnificent!” The clubsmen’s scowls faded as they set down their clubs and the gift baskets and began to look around, seeking the fairest, or at least cleanest, of cave women about. Zuk harrumphed for attention, then continued bellowing, “But first we must honor our king by presenting him with his royal cloak.” Zuk elbowed Zub, who nervously unfolded the weasel pelts he had worked on all night.

As Zub stepped forward to present the cloak to the king, Zuk raised his arms in salutation as he bellowed, “Ladies and Gentlemen, please bow as King Mog is wrapped in this royal cloak crafted from the finest fur of Far East… Sable! And trimmed with the exotic fur of… Ermine—most assuredly a cloak fit for a king!”

Sable? Ermine? Zub could hardly believe his ears as the cave women began to “Ooo” and “Ahh” over the weasel pelts he’d worked up into Mog’s new cloak. Then a wry smile flitted across his lips as, deep in his heart, Zub realized that not only had his old friend saved his life, but from that day forward, kings and queens and haughty women of wealth would wear weasel and think they were really something quite extraordinaire.

James Fox is a husband, father, a former volunteer canoe docent for the State Parks system, and former Woodbadge trained BSA Scoutmaster. During his career as a credit manager for a steel service center he authored several articles in a trade magazine, but it is off-work experiences in the mountains and along the streams and rivers of California that have often been the basis for his short stories and poems. He also stalks family and friends for short story ideas. Writing from Lodi, California, he has been published in Pure Inspiration Magazine, Scouting Magazine and the Thin Threads anthology “More Real Stories of Life Changing Moments.” Over a dozen of his short stories have appeared in various publications such as The Front Porch periodical and Bards and Sages Quarterly. Usually writing in the creative non-fiction genre, James has recently delved into fiction writing. His one lament is that while the late Andy Warhol had promised us all a few minutes of fame, fortune would have been so much better.

WHY WE CHOSE TO PUBLISH “Zuk and Zub—A Fable for Our Time”:

What more can we say than this is a charming tale with a lovely surprise at the end? Author James Fox has delivered a short, sweet fantasy tale.

A quick search of the internet tells us that luxury furs first became popular in the 11th century and that by the 1300s, laws were passed regulating which social classes could wear which types of fur. But you have to wonder if maybe it goes back a lot further in time.

In any case, this piece made us smile a lot.

A RAPE OF RAVENS by J. B. Toner

PICK ME by Curtis A. Bass

HOW THE WINCHESTER GANG SAVED THE WORLD by John Caligiuri

ZUK AND ZUB—A FABLE FOR OUR TIME by James Fox