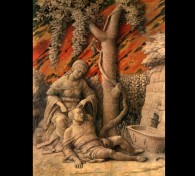 Once, I lost everything.

That may have been my only reason; that would have been enough. I was feared. Men of power defeat what they fear. In the aftermath, I was left with nothing. They were not the only ones surprised by his sudden infatuation with me. His reputation preceded him, intoxicated the air around him, sending innocent bystanders into some fantastical state of punch-drunk love. Everyone saw a man too powerful, too charming, too lovely. When they looked at me, they saw a woman. That was all.

I friended, bedded, and loved this man who unscrewed preserve lids easier than me, who ground the grain effortlessly, and lifted the bed to unveil frightened scorpions without protest. I loved this man like a mother loved her child, a warrior battling to protect his delicate, gentle heart. For all of his strength, he was a man made of sugar crystals, dissolving at the first raindrop. He whimpered in his sleep, and when he couldn’t find my skin in the sea of bed, he pulled me across the bed toward him with a force that gave me whiplash, bruised shoulders, tangled hair. His bedtime stories were of his conquered, never realizing I was a different kind of conquered.

This was not only about him.

I was tired, exhausted from carving a life from limestone with only my fingernails. They, those who feared, offered me a sharper tool. It was inevitable; this was always going to happen. I couldn’t bear to know anyone else had delivered his fate. For all of his strength, I had always known his weakness; I asked anyways. Each lie moved us like a freight train toward this inevitable. The love in my heart for him built a wall between us, growing higher with each defeat. I knew it would only take three times to hear his truth, yet I begged him each night. We never spoke of the strangers in the night; in his sleep-filled eyes, he never saw me standing outside, wind blowing my shadow toward him. He was immune to it. Eventually, a monsoon swept through, and those sugar crystals dissolved. He lost himself in me; he paid the price.

In the aftermath of my conquest, I regained what I once lost, but I lacked the depth in my soul to delight in my domain. The wall that divided us became a room with a vaulted door whose combination was lost in the final night. It was never as it seems; how could anyone expect it to be?

He had the final words.

Raven-black locks regrown, wrists chained to columns, body on display like an animal to be slaughtered, he stood tall still. I silently cleansed an open wound with salted tears. My eyes, my hands pleaded apologies. Did he understand? Like the man nailed to balsa wood that would follow him, he forgave, strapped and struck still by force. He began to bring the columns into an embrace. I closed my eyes until I heard the roar of a man granted a chance. I fell to his feet as he fell to mine. The structure crumbled, full of those who forced us to kill each other.

I gained nothing from anyone, except him. I will always be the woman who betrayed, the siren who seduced. I was never her. I lost, I protected, I conquered; but I was never her.

Shannon is a student at Penn State University majoring in History and English. Her peers chuckle at her choice of degrees. However, she disagrees because she has learned the most eloquent, subtle way to tell them that they are wrong. Mechanical pencils are her weapons of choice, and she refrains from flinging them at the customers she encounters at her retail job. Her poetry has appeared in Penn State’s literary magazine, Kalliope.

WHY WE CHOSE TO PUBLISH Delilah:

The strength of this story lies in showing the reader a point of view that we have traditionally relegated to that of an antagonist instead of a protagonist. Indeed, Shannon Ratliff gave us a lot to think about—in only 565 words. And that’s what makes for a superb piece of flash fiction.

ONLY THE DEAD KNOW by S. R. Mastrantone